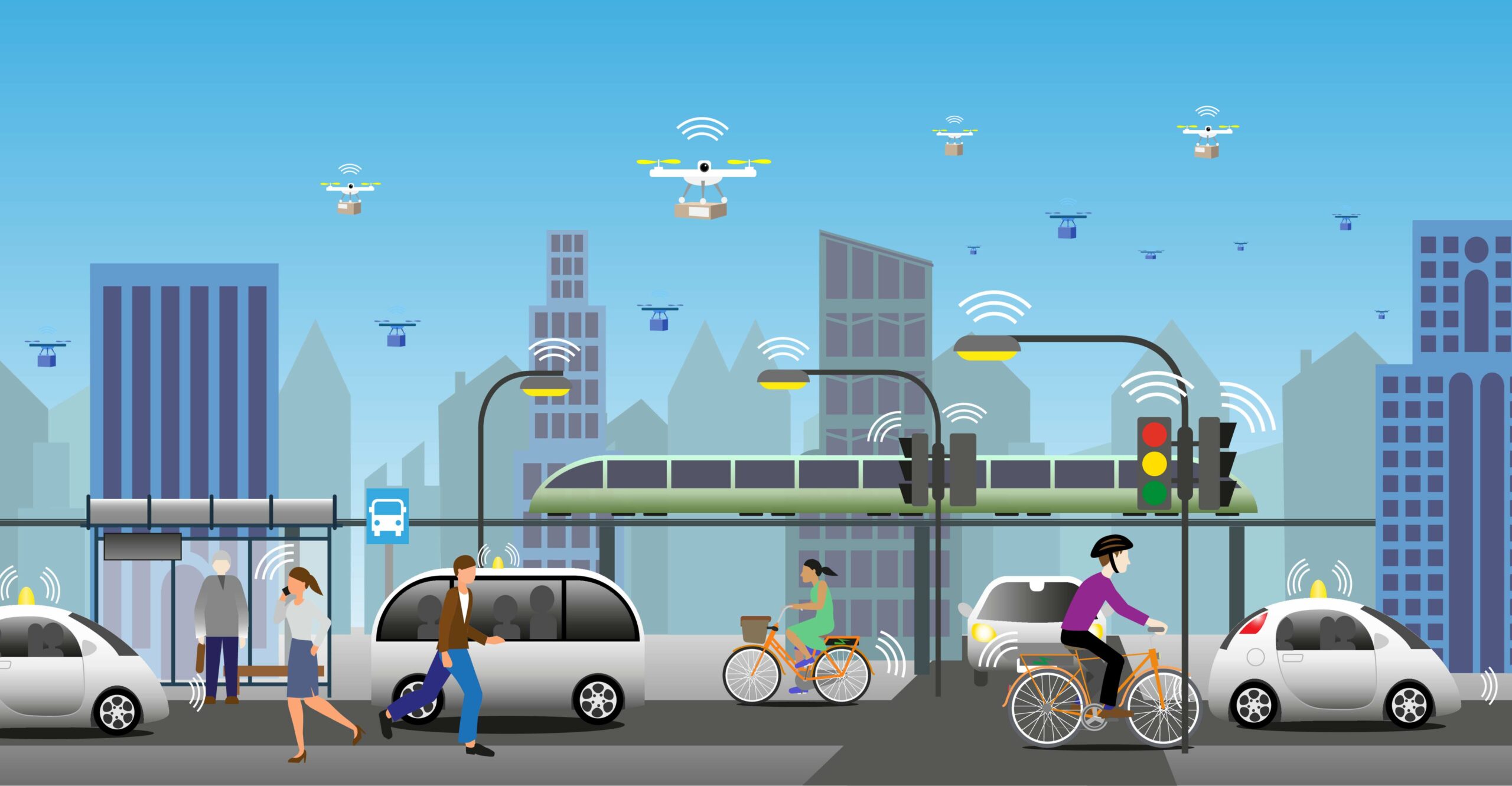 How automated and autonomous driving influences and changes traffic in the city: This is one focus of the study “Autonomes Fahren im Kontext der Stadt von Morgen” (Autonomous driving in the context of the city of tomorrow) by Fraunhofer IAO. Here is an overview of some possible opportunities for urban traffic.

Private vehicles will be used almost exclusively for leisure activities on the weekend, while autonomous shuttles and car-sharing services facilitate urban transportation. Those visiting the city from surrounding areas will also increasingly opt for ride sharing. An intermodal system will emerge in which users can organize their own transfer from one means of transportation to another, supported by digital assistance systems. Mobility subscriptions will not only include public transportation, but also car sharing, e-scooters, and autonomous shuttles.

2. Vehicles will be used to capacity

The use of autonomous vehicles for public transportation will reduce the number of vehicles in the city, while also increasing the efficiency of the traffic flow. There will be fewer accidents, pollution levels in the air will decrease, and the need for parking spaces will decline. While vehicles today spend most of the day (90 percent) parked on the side of the road or in a parking lot, autonomous shuttles will operate almost continuously. “Cities that are heavily dependent on cars, and whose infrastructure includes more roads and parking areas, have the potential for higher savings than cities that already have well-developed public transportation,” says Armin Gräter, an expert on autonomous driving at BMW.

3. Roads will be used in new ways

Since cities will continue to grow, the infrastructure must become more efficient. Busy roads such as city freeways and beltways will allow for better traffic flow by reducing the distance between vehicles (, for example. By intelligently controlling intersections and using semi-automated vehicles, it is even possible to double traffic throughput.  On the other hand, there will be more and more alternative mobility offers. Private motor traffic will decrease, and the roads will be increasingly claimed by bicycles, e-scooters, and pedestrians. For example, there will be traffic-calmed urban areas next to high-traffic access roads.

4. Mobility hubs will facilitate the transfer to private transportation

Mobility hubs will be established to facilitate the transfer from one mode of transportation to another. For example, if you get off the subway, you will find rental bikes, car-sharing offers, or ride-sharing shuttles at the exit. Public transportation and individual mobility will thus be synchronized. One option – as in Leipzig – is to “offer a variety of vehicles at the big hubs in central locations, with buses and vans, the things I rarely need, and then have additional decentralized mobility hubs for short distances,” says Torben Heinemann of the City of Leipzig. Centralized and decentralized mobility hubs will be linked with each other via digital interfaces.

5. Car sharing and automation will improve air quality in cities

Together, more electronic vehicles and better traffic flow will help to greatly reduce emissions of carbon dioxide and nitrogen oxides, as well as particulate matter from tire abrasion. Traffic flow optimization also encompasses drivers being supported by automation functions in their vehicles. And that means less frequent strong acceleration and braking and a more constant speed. Ultimately, this will benefit the environment and thus, together with other “nature-based solutions,” help make cities more resilient to climate change.

If you are interested in the entire study: The study “Autonomes Fahren im Kontext der Stadt von Morgen” (2019) can be downloaded (in German) free of charge.