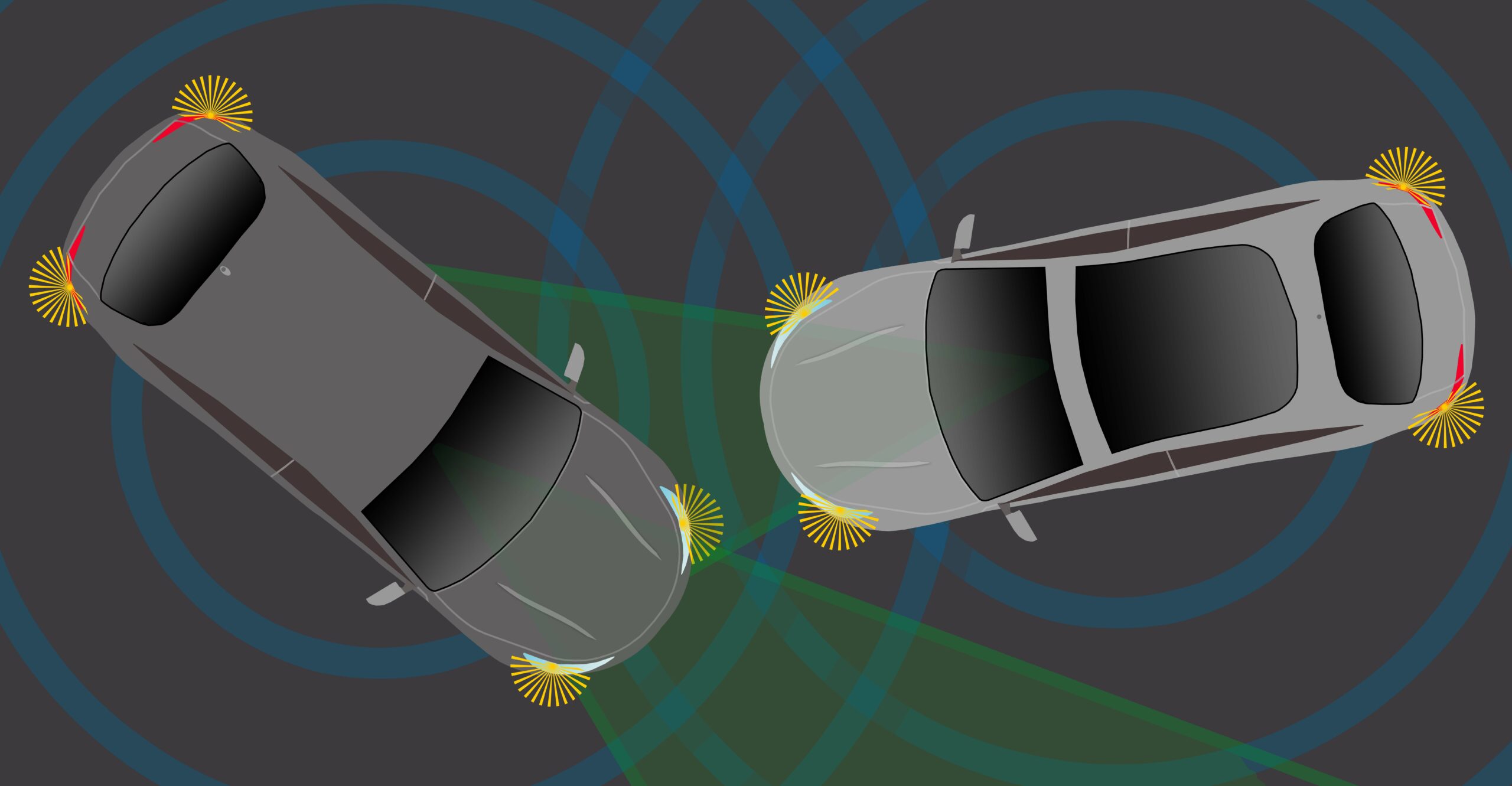 Autonomous vehicles: Which sensors are used

The sensors in your vehicle are only as good as circumstances allow. Complementing in-vehicle sensors with external information increases precision and safety. An overview of sensors that are currently installed in vehicles.

This sensor is often used for parking assistance. It works acoustically and has a short range of no more than ten meters. In addition to parking assistance, it is also used as a sensor in blind spot monitoring systems, which are designed to prevent collisions when changing lanes. Although comparatively inefficient, they are inexpensive and robust. Placed around the car body, they will be indispensable for future autonomous vehicles.

The camera is also one of the most economical systems for monitoring the car’s environment, but it is dependent on good visibility conditions: Its reliability is limited after dark or in fog or heavy rain. Although a mono camera only provides a two-dimensional image, algorithms are able to use this image to calculate a three-dimensional model of the environment. The calculation is particularly successful when data is available from other sensors, for example from a radar. However, many manufacturers use stereo cameras, which, like the human eye, provide additional spatial information. Video sensors are mainly used for emergency braking systems. Image recognition software helps avoid collisions by identifying pedestrians and cyclists crossing the road, for example.

Radar: Captures distances and speeds – even at night

Electromagnetic sensors have been used more and more frequently over the years, especially in adaptive cruise control (ACC) systems. The technology is considered robust and relatively inexpensive. Radar can measure distances and speeds, but it has difficulty detecting non-metallic obstacles such as people. In addition to low-cost short-range radar for detecting objects up to 30 meters away, there are more expensive medium- and long-range systems with a range of up to 250 meters. Short-range radar is mainly used in cross-traffic alarms for parking sensors, while medium- and long-range radar is used for distance control on the highway or in emergency braking systems.

The sensor transmits a beam of light and uses the reflection time to calculate the distance to an object. It can also create 3-D maps. Today, the technology is mainly used for obstacle detection in emergency braking systems for city traffic, providing reliable results at a relatively low price. Lidar can detect people better than radar.

With the help of a rotating mirror, this special form of lidar observes the entire 360-degree environment in high resolution and over great distances. This sensor is considered indispensable for autonomous driving. So far, however, the technology has been used only in prototype vehicles and is accordingly expensive.

Alongside classic sensors with their one-way communication, connectivity to the environment will become increasingly important in the future. This includes information from external infrastructures such as those used in Providentia++. The car is then no longer dependent on its senses alone, but can enter into dialog with its surroundings – using information from a digital twin, for instance. In contrast to the autonomous localization of classic sensors, the term cooperative localization  is used for this, with the obstacle actively reporting to the vehicle or responding to a query. Several cars can thus coordinate their routes, or pedestrians can carry transponders that keep vehicles away from them.