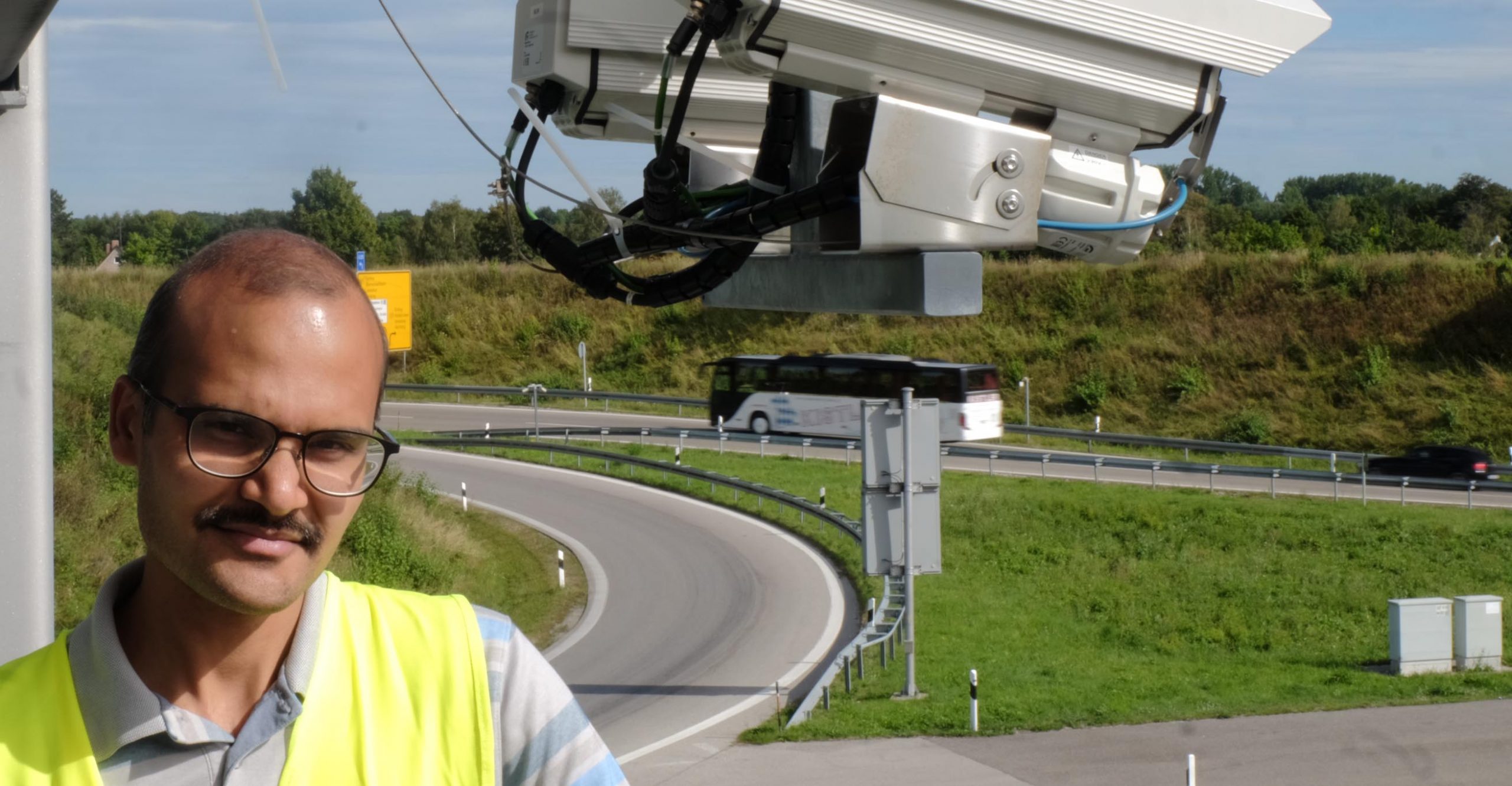 Within the Providentia++ consortium project, scientist Venkatnarayanan Lakshminarasimhan from the Technical University of Munich is researching how vehicles communicate with each other and with the infrastructure. His goal: to use network resources as efficiently as possible.

From coordinating speed and lane changes to warning each other of traffic jams or accidents: When vehicles are networked with each other, traffic is potentially safer and flows better. It seems clear that the number of connected vehicles will increase worldwide: A study conducted by Counterpoint management consultancy prior to the outbreak of the coronavirus pandemic predicted that 286 million vehicles equipped with networking technology would be sold by 2025. The greatest demand for these vehicles will come from China (35%), followed at a distance by Germany (9%), the USA (8.2%), and Great Britain (6%). In absolute figures, the market research company from Hong Kong thus expects more than 25 million new connected vehicles on Germany’s roads alone.

The question is how vehicles will “talk” and exchange information with each other in the future. In the new Golf 8, Volkswagen decided against cellular communication and in favor of “WLAN” adapted to road traffic – the ITS-G5 standard.

Mr. Lakshminarasimhan, you are doing research on V2X communication, concentrating on C-V2X radio technology. Why did you decide on this?

A WLAN-based solution according to the ITS-G5 standard of the European Telecommunications Standards Institute (ETSI) has advantages in that the frequency spectrum it uses is unlicensed, and the ad-hoc networks allow communication without network infrastructure or operators. However, the more connected, V2X-enabled vehicles are on the road, the less reliable the ITS-G5 technology is. This is especially due to limited bandwidth for data transmission. Delays in communication occur – with the risk of data being lost. With Cellular V2X (C-V2X) technology, which is based on LTE and 5G, it is possible not only to circumvent these limitations, but even to make confirmations and guarantees for data transfer. This makes C-V2X particularly well suited for the upcoming Providentia++ applications, which require extremely low delays and absolute certainty that the data has been transferred.

In general, a vehicle needs data from its immediate environment. In the short range, the exchange of sensor data is critical; in the mid-range, maneuver planning plays a special role; and over longer distances, strategic planning dominates – for example, the question of whether it is better to leave the highway to avoid a traffic jam. From a technical point of view, mobile network radio cells will be set up with the help of base stations along the highway in order to connect the vehicles with each other. But stationary radio cells also pose challenges for architecture: A comprehensive and reliable network requires a dense infrastructure with many base stations, as well as a large amount of radio resources.

What technical alternatives are there to stationary radio cells?

Our idea is to create small network zones and move them along with the vehicles. The advantage: The computers in the vehicles are sufficient for processing the data and, ideally, no base station is needed. This approach also means that radio resources along the network convoy can be used multiple times.

We simulated the architecture over a distance of five kilometers on the highway. We based this on three scenarios. For Scenario I, we set up five stationary radio cells; for Scenario II, we defined stationary network zones that were coordinated by sensor stations; and for Scenario II, we defined mobile network zones that were managed by vehicles. Which of these scenarios makes the most sense in the end depends on the proportion of connected vehicles in traffic. If there are only a few connected vehicles on the road, or if the proportion of connected and non-connected vehicles is roughly equal, Scenario II requires the lowest amount of network resources. Scenario III is in a sense the scenario of the future. Because if a clear majority of vehicles are connected, this approach requires the lowest amount of network resources. Our results also show that it may be useful to develop an algorithm that independently decides which scenario is used in which traffic situation. But we still need to confirm these simulated figures in practical tests.

Click here for the research paper by Venkatnarayanan Lakshminarasimhan and Alois Knoll.